I am consolidating here a couple of instructions (here and here, and here for the ESXi shell activation part) I found to activate nested virtualization on a VM in an ESXi server without access to the server vmware part. You need to:

In a recent project we found the issue that the metadata service running on the compute node was not reachable by the VMs running on it.

In the project we use Ubuntu 14.04.3 and vanilla OpenStack (kilo). The implementation uses nova network (with VLANs) in multihost mode with an external gateway for each VLAN. The latter can be achieved by:

In our configuration the VMs are not able to reach the metadata service when being provisioned. In other words 169.254.169.254:80 is not properly DNATed to hypervisor_IP:8775 for the VM.

The underlying reason is that since the VM has a different gateway (the external gateway) than the hypervisors VLAN IP, there will be no IP routing (it is only a L2 not an L3) so the  PREROUTING chain in table NAT will not be traversed by these packets.

To solve this issue we force these packets to traverse the IP routing with an ebtables rule like:

Enjoy the ebtables! Find more examples and documentation in here.

For a recent project we (me and Wuming) had to provide an OpenStack cloud in which the raw infiniband protocol would be available to the VMs running on the cloud.

The installation was done on Ubuntu 14.04.3 with vanilla OpenStack. Exposing infiniband requires quite a few steps and reading/googling quite a bit so I will document it here in case somebody needs to do the same.

To expose the native hardware interfaces to the VM:

And now… Just launch a VM and log in! You should see the Infiniband card!

In this presentation you find an overview of the functional architecture of OpenStack and a deep and detailed explanation on how OpenStack processes work. Enjoy!

If privacy is important for you, you will wish to have a protomail account. They provide a very good privacy in hosted email, if you of course believe their claims, which I have no reason not to.

This will only last for a limited amount of time.

I very interesting talk on Ceph and its scalability issues, and another hands-on one about Docker containers.

This talk: “Deep Dive Into a Highly Available OpenStack Architecture“, given at the recent OpenStack Summit in Vancouver, provides an unusual nice balance between overview and details!

It will provide you with a sound understanding of the architecture and services of OpenStack, specially the later, and how to make the OpenStack services Highly available.

It does not cover Heat or Ceilometer but once you understand the other services it is not complicated to use the same architectural concepts.

I highly recommend watching it!

If you follow the Openstack  command line client tools installation guide you will have an issue. For example to install the keystone tools (Mind root access, add sudo when needed):

This will result in the error when trying to execute the tools (with nova you would get the same error!):

raise Exception(“Versioning for this project requires either an sdist”

Exception: Versioning for this project requires either an sdist tarball, or access to an upstream git repository. Are you sure that git is installed?

As the website for this new company Cloudlynx states. They are a Highly Compliant Swiss Cloud. They will go to an encrypted experience of the Cloud.

They will not have the problem with data being hosted in the US and thus being subject to the patriot act. For many European this should be attractive.

Also the privacy rules that characterise Switzerland should be very appealing.

Pre-caching images on nova-computes is a tricky issue that may be a big headache to an Openstack Administrator. Here at CERN we have put together a pre-caching system, that has enabled us to send a 1,7 GB image to 1300 servers in under 9 minutes. Keeping in mind the ease of maintenance and scalability at any amount, we wish to present this idea.

Our major concern is the pre-caching of the images on nova-compute nodes. Glance is the central service that provides the infrastructure with VM images. One of the problems that Glance has to encounter, is the scaling of image deploying in large infrastructures. This issue has been addressed by the community with the pre-caching middleware, which stores Glance images on the OpenStack API servers. Here we present an alternative way that it is easy to maintain and deploy, is scalable and, most importantly, is based on existing and proven technologies. Before we present our idea, first we would like to give a brief description of our needs and use case.

The CMS experiment at CERN during the Long Shutdown, decided to “lend” its cluster on the GRID community for their experiments. The HLT (High Level Trigger) cluster is composed by 1300 servers that we want to provide to the GRID site, which include 1 Glance server with 1 Gbps link to the network, 4 servers that host all openstack services on failover with 2 Gbps link each and 1300 hypervisors (with more to come in the future) with 1 Gbps link each.

We have some very specific needs, and thus our utilization of OpenStack may not be the standard case of a cloud provider or any other organization that uses cloud. For instance:

Despite these specifications, we believe that this presentation may help further develop the caching system in OpenStack.

This pre-caching system is external to OpenStack. This means that zero configurations and patching is needed to the source code, which implies that it can be backported to any version of OpenStack. It contains 2 python scripts, one installed at Glance’s side and the other one on each nova-compute node, an Apache httpd server and multiple squid servers deployed at key points at the infrastructure. In the following image you can see the a tree topology of the pre-caching system that we use in our case. Any kind of topology can be used, that fit the needs of a certain infrastructure. 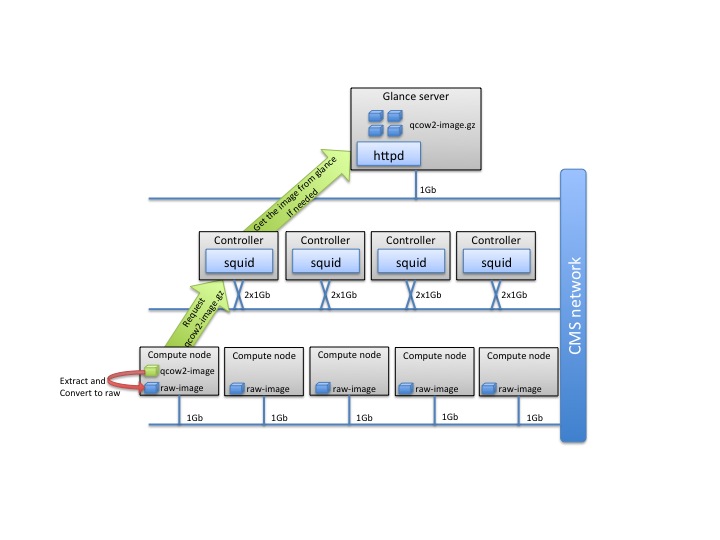 The Glance server hosts the httpd server where we are going to place our image, for pre-caching. The first python script provides a CLI through which one can declare the image-id that they want to pre-cache. The script finds the image, zips it with gzip and places it on the apache httpd folder.

The second step is to ask the nova-computes to fetch the image. At this point one could use the second script (which runs on the nova-compute side), which also provides a CLI which can take the image-id for caching as an input. The script will connect to the httpd server through the squid proxy. It will then retrieve the image and unzip it at the local folders of nova-compute.

We put this idea to the test and the outcome was a great speedup, as expected. Below we present some numbers on image sizes, network traffic and time.

In this section we would like to describe further the most important reason that has driven us to develop this system, based on technical details.

1. Why not OpenStack Glance caching

Glance pre-cache middleware does not support compression. In our case (you can see on the benchmark section the differences in the size), we earned a great benefit in network traffic by compressing the images.

The HLT cluster is already using Squid, so it would be a waste of resources as well as an administrative overhead to install a bunch of additional services on top of the existing ones.

A second argument is that Squid provides a fine set of features that can give great flexibility to administrators regarding how they use the storage amount and policies, the network configuration and topology. Many of the squid features are not available through Glance cache.

There is a small catch using Squid as a medium to serve the images to the nova-compute nodes. When the images are prepared at the Glance side, and copied in the httpd directories, there is no way for them to be pushed to Squid servers. There is a workaround to this problem by sending a signal to a custom script on each Squid server and ask the server to fetch the images, but we thought that this would further complicate the pre-caching system to a great deal.

Instead, we decided to insert a random delay on the nova-compute requests, so that the first connection that will arrive to the squid server will work as a “warm-up” request for the Squid cache.

The major advantage of Gzip is its low time of decompression. Unlike bzip2, gzip is very fast, even though gzip is 8% less efficient in compressing the same image.

A second advantage of gzip, is its streaming properties (bzip2 can be used too, but as said above, it is slow). When we as a nova-compute to download the image through the Squid network, we uncompress the image at the same time to speed up the process.

We created a simple reporting system to help us track down which images are cached where.

As a conclusion to this article we would like to sum up the differences between the current state of both Glance caching and our system, and a future plan.

This is a small table comparing the two frameworks: